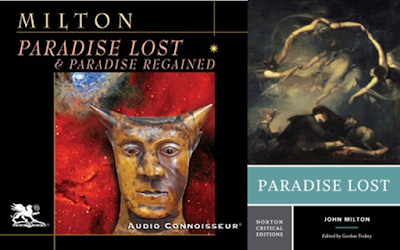 I will be joining Risa at The Next Chapter in reading Paradise Lost over a period of a year (one book per month). I'm reading the Norton Critical Edition, and listening to the audiobook narrated by Charlton Griffin.

This week I read Book I, verses 1-191. The story begins just after Satan and his minions have been booted out of Heaven because they revolted, thinking they could be as powerful as God. They land in a firey landscape with all their former brightness and luster diminished, but their strength intact. Satan, with wrath and wounded pride says to Beelzebub that God was stronger than he'd thought, but that they'd been thrown out because God had doubted himself against Satan's army's power. Satan exclaims that since their strength still remains eternal, they'll wage a war with God until the end of time. Beelzebub suggests that they have been left their strength so that they may withstand all the more suffering, or that perhaps they are meant, from now on, to work as thralls to God (which would also require their full strength). He asks Satan what it would avail to wage war against God when he must be almighty to have overthrown an army such as their own. Satan does not answer this inquiry, but vows that they shall bring evil out of the good acts of God.

Then Satan notices that God has recalled his own army back to the gates of Heaven. Despite whether this recall is because God's wrath has been satiated or whether God simply scorns Satan's powers and feels the army is no longer needed, Satan's army will rest and confer about what to do.

The first thing that struck me while reading is: no wonder Satan wanted Adam and Eve expelled from paradise - just as he and his own army had been expelled from their own paradise. The title "Paradise Lost" may not only refer to Adam and Eve's loss, but to Satan's as well.

Another thing that struck me is that this story is in the viewpoint of Satan. He will be fighting for evil simply because it is the opposite of what God wants. He doesn't seem to want evil out of his own nature, but because God has driven him to it.

I loved the vivid imagery in this section. The descriptions of Hell were delicious. Milton sure does know how to set a scene and a mood.

I'm glad that I'm listening to this on audio while reading, I think it's really helping my comprehension.
Posted by Rachel at 4:50 PM