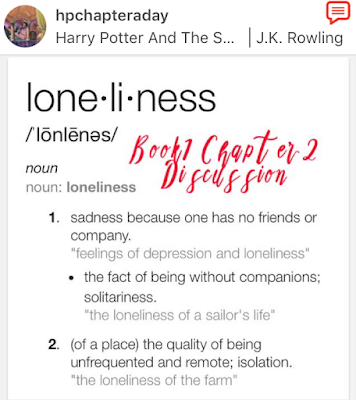 This is part of an 11-month group project on Litsy to read one chapter of Harry Potter a day, and to comment on a theme each day. These posts will have spoilers. Today's theme is loneliness.
There are three lonely characters in chapter 2: Harry himself, the snake, and presumably Mrs. Figg. Mrs Figg is only mentioned glancingly, but I think a little loneliness is shown in an older woman living alone who delights in showing off pictures of her many cats. I'll focus on Harry and the snake.

Both Harry and the snake are being raised away from their natural homes. They are both kept in cages - Harry in a cupboard and the snake in a cage - and both get poked and prodded and abused (the snake through the glass). They can sense this in one another, and this is why they make an instant bond together.