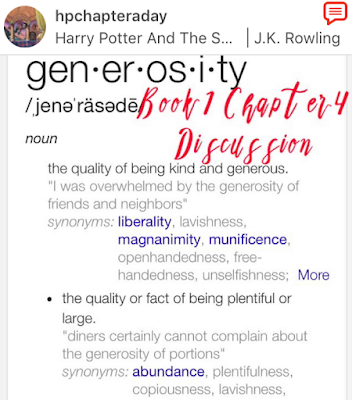 This is part of an 11-month group project to read a chapter a day of Harry Potter and comment on a theme. These posts will contain spoilers. Today's theme is "generosity."

In chapter 4 of Sorcerer's Stone, The Dursleys and Harry are ensconced in a rickety old house on an island, protected by a raging storm. As Harry counts down the minutes to his birthday, a giant (Hagrid) breaks down the door. Hagrid makes a fire and gives a cake and sausages to Harry. He explains about Hogwarts, magic, Voldemort, and Harry's parents. Then he pretty much kidnaps Harry (much to Harry's delight).

There are several characters either actively working or passively working in this chapter: Hagrid, Harry, the Durleys, Harry's parents, and Voldemort. As we all know, Voldemort epitomizes all that is antonym to "generosity." And as far as Dudley is concerned, only the second definition applies to him.

The obvious examples of the first definition of generosity in this chapter is Hagrid's generosity to Harry. And Harry's parents' generosity to the world. Hagrid fed Harry, he patiently explained what was going on, and he gave Harry his coat to keep him warm. Best of all, he remembered Harry's birthday. Harry's parents gave their lives to help defeat evil.

A less obvious example of generosity is the Dursleys. They are, at some level, generous to raise Harry despite their obvious distaste to do so. They don't spend much, but they do spend time and money on him. They risk everyone learning that they are not "normal" by raising a child that is anything but normal. Both Voldemort and the Dursleys can be considered "bad sorts of people." But notice that the Dursleys aren't as evil as Voldemort. They have some good in them. And part of that good is shown in their willingness to raise Harry despite every inclination not to do so.