Nonfiction November is over! Oh no! I immensely enjoyed the opportunity to co-host and look forward to participating in the years to come. Due to an unfortunate setback in my own reading, I only finished one book so far - The Price of Silence, by Liza Long, but I hope to finish Neurotribes by Steve Silberman and The Righteous Mind by Jonathan Haidt before the end of the month. (Reviews to come.) 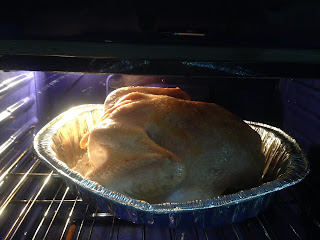 I had lots of pictures to share with you - this one is a bit creepy with the light shining on that missing turkey head. Yes, I'm trying the technique of cooking it upside down and then flipping it the last hour to save juiciness in the breast meat. I'll see in a few hours whether it worked. 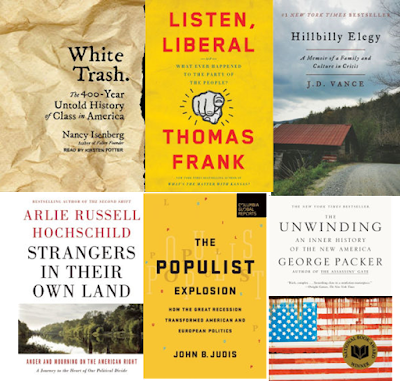 Well, I've been absent from the blogging world since the election (besides my pre-scheduled Nonfiction November posts which I'd written earlier in the month). I've been experiencing some post-election blues. It's hard with bipolar disorder to keep my mood within a reasonable range. I went from reading 6 books at once (slight hypomania) to having not picked up or listened to a book since the election. My Nonfiction November reads are definitely going to leak over into December now. 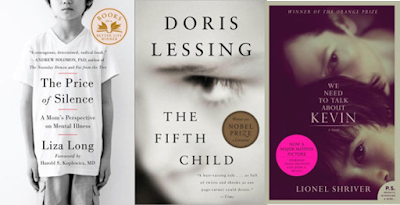 Nonfiction November: What are you looking for weekly wrap-up

Another great week has passed with Nonfiction November! This week we discussed what you're looking for in nonfiction. This is a wrap-up post to give you an idea of what each person answered to this question. Be sure to check out all the blog posts, as well as participating in next week's book pairing prompt hosted by Sarah @ Sarah's Book Shelves.

Rachel @ Hibernator's Library (me!) said that I tend to like well-researched "textbook-like" nonfiction

Lory @ The Emerald City describes how she  prefers to stay away from textbook-like books and focus on books that have more of a personal feel to them.

Heather @ Based on a True Story outlines 4 characteristics that keeps her interested in nonfiction: authors who're writing about challenges that they've taken on for a certain period of time, authors who write about the travels they undertook while researching a book, books about food, and books about fighting injustice.

Amanda @ A Bookshelf Monstrosity is not interested so much in topic as in the style in which the book is written. She enjoys the narrative writing style.

Steph @ B.B. Toady describes what she's looking for in a nonfiction book cover for a variety of non-fiction subjects.

Stacey @ Unruly Reader shared a great cover from a nonfiction book that she loves: Chasing Water.

Debbie Rodgers @ Exurbanis gives examples of some subtitles that drew her in.

Katie @ Doing Dewey makes a good point about how the font on a title may affect a reader's choice.

Eva @ The Paperback Princess shows us five covers that she really likes.

Jo Ann @ Lakeside Musing says that she tries not to let covers influence her, and gives examples of several good books, some with inspiring covers and some not.

Sharlene @ Real Life Reading likes books that are funny and those that have the author's personality infused in the writing.

Kailana @ The Written World wants to learn something new - she'll even try reading the drier stuff in order to learn.

Amanda @ Gun in Act One loves books about feminism and biographies of awesome women.

raidergirl3@ an adventure in reading gave examples of clever titles that drew her in.

When Ryuk the Shinigami (Japanese god of death) gets bored, he decides to liven up existence by dropping his Death Note on Earth. This Death Note has the power to kill whomever's name is written in the book, as long as the person can visualize the face while writing it. A teenager named Light Yagami finds the book, and decides to use the book for good by killing murderers who have gotten away scott free. But he doesn't account for the police force (including his father as assistant chief) teaming up with L, a mysterious crime-fighting genius. The law wants to keep the law in its own hands, and Light needs to outwit his pursuers.
Read more »
Posted by Rachel at 7:56 AM No comments:

What do you look for in nonfiction?

Welcome to the second week of Nonfiction November! This week's topic is:

Reading with the Cats 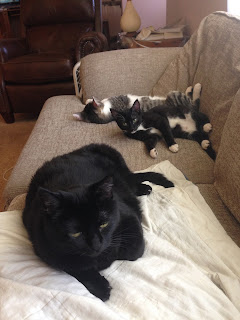 This week was a good one. I didn't do a lot of stuff, so I had lots of extra time to read. I didn't do anything for Halloween since I'd expected to work (in fact, the electricity went out and I got to leave work early, but I was tired when I got home and used the extra time to relax). I'm looking forward to election day coming up. This has been an exhausting election season! I hope you all take the time to have your voice heard on Tuesday. Vote!
Read more »
Posted by Rachel at 9:33 AM 14 comments:

Men We Reaped, by Jesmyn Ward

First of all, I will have difficulty in this review expressing how good this book is. It is a memoir about the deaths of several young black men that grew up in a lower socioeconomic class. It shows the difficulties of navigating in a world which most of the readers are unfamiliar with. In Men We Reaped, Ward elicits grief and frustration in the readers which makes it a very difficult book to read. I teared up a few times. Definitely a must read for anyone interested in social issues or emotional memoirs.

Stiletto is the sequel to the fantastic book The Rook, by Daniel O'Malley, and the review contains spoilers for the first book. In Stiletto, Myfanwy Thomas' truce with their enemies the Grafters is beginning to solidify, but the anger and fear on both sides is difficult to dispel. However, they soon realize they have a mutual enemy to fight.