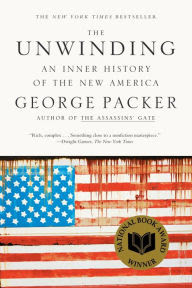 Question 1: This story was separated into biographies of several people which presumably will teach us why the populism movement has become popular in America. Whose story was most moving / interesting to you?

Tammy Thomas's story was most moving to me because it reminded me of a book I read for my social justice book club: Men We Reaped, by Jesmyn Ward. I had been wondering if Ward's experience with the deaths of blacks in the poorer class black community were unique. The implication was that it was not, but I'm a skeptic sometimes. Indeed, although there were fewer deaths involved in Thomas's story, it confirmed that deaths are a more common experience than I expected in this community. That, to me, is tragic.

The most interesting story was Oprah's. I guess I was never a fan of the Oprah Book Club because many selections are about miserable people being miserable, as Morphy would say. (Don't get me wrong, there are a few good ones in there.) However, this section was the only section where I could totally see Packer's point - that the pipe dreams encouraged by Oprah could bring people down.

Question 2: What do you think his thesis is? Was it made clear in this section.

I have to admit that I don't know what his point is with any of the stories except the Tammy Thomas's, the Walmart one, and the Oprah one - that there are reasons (other than the obvious ones) that poorer people who are brought down by these circumstances. But I guess that's because I already expected this theme. In Jeff Connaughton's story I THINK the point is that lobbyists encourage corruption in Washington. The others, maybe that these successful people increase the poor / rich financial divide.

Question 3: What do you think of the format of the book, where it is split into biographies instead of a straightforward narrative?

Personally, I'm skeptical that I will be able to see a strong thesis, though the reviews certainly imply that I am wrong. I would prefer a straightforward narrative because the people are hard to keep track of, though I think it's a very creative way to share a thesis (if that, indeed, is what happens in the end.)

Question 4: So far, a lot of the narrative about successful people. Does this surprise you?

As I said in my answer to question 2, I expected stories about down-trodden people who want to make America great again.
Posted by Rachel at 4:00 AM