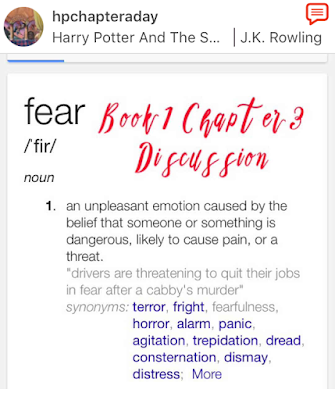 This is part of an 11-month group project to read a chapter a day of Harry Potter and comment on a theme. These posts will contain spoilers. Today's theme is "fear."

There are four people who are afraid in chapter 3 of Sorcerer's Stone. Those are Harry, Dudley, and Mr. and Mrs. Dursley. Harry is afraid of Dudley - enough to make him hide outside his home most of the summer so that he will not get beaten up. Despite this fear, it doesn't seem to control his life to make it unmanageable. Dudely is afraid of/for his father when he starts acting erratic. And of course Mr. and Mrs. Dursley are terrified of the letters Harry is receiving and what they stand for. It is easy to bring in reasons for this fear which are addressed in future chapters/books, but this discussion is meant to be only on this one chapter. This chapter doesn't explain the fear (other than a fear of lack of normalcy) but that doesn't make the fear less real to the reader.

When Harry first gets his letter, both Mr. and Mrs. Dursely react by paling noticeably. They are visibly shaken. So much so that their instinct to give Dudley everything he wants is eclipsed. They even give Harry Dudley's free room in realization that someone must be watching them if that person knows Harry lives in the cupboard. What are they afraid will happen to them if they involve themselves in this mysterious world? The fear eventually drives Mr. Dursley mad.

I think the interesting thing about Rowling's depiction of fear in this chapter is the difference between Harry's reaction to fear and the Dursley's reaction to fear. The Dursley's (who aren't drawn in a positive light in the first three chapters) are driven to distraction by their fear. Harry doesn't let it control his life. Perhaps that's because Harry has a connection to some spiritual peace that the Dursleys lack.
Posted by Rachel at 3:40 AM