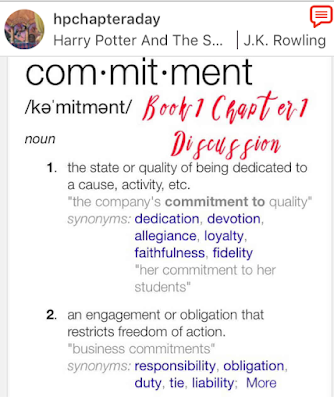 There's an 11-month project on Litsy to read one chapter a day of Harry Potter and comment on a theme. Today is the first day of the project, and we're reading Chapter 1 of Harry Potter and the Sorcerer's Stone with the theme of commitment. These posts will contain spoilers.

I could talk about the commitment of the teachers of Hogwarts in bringing Harry safely to the Dursleys', but instead I'm going to focus on the Dursleys themselves. Using the first definition above, the Dursleys are committed to normalcy. They don't even talk about Mrs. Dursley's strange sister. They want nothing more than for others to view them as the most normal people on the planet. Mr. Dursley is so committed to normalcy that he ignores abnormal things all day long. He sees a cat reading a newspaper, people running around in cloaks, owls swooping around town, but  he manages to "not see" at the same time. He explains it all away, and manages to forget about it. Until he can't anymore - he hears the names of Mrs. Dursley's sister's family mentioned by the strangely dressed people. But he's so committed to normalcy that he can hardly bear to mention the incident to his wife, who acts like some sort of vow is broken when he does.

On top of that, the teachers of Hogwarts are asking for a commitment from the Dursleys when they drop Harry off on their doorstep. That's a lot to ask of someone, especially someone who doesn't even want the name of "Potter" mentioned in their household. We know from future chapters that the second definition of commitment applies in this case - that the Dursleys feel obligated and that their actions are restricted by this obligation. But since we are not supposed to discuss future chapters, I'll stop here.
Posted by Rachel at 7:37 AM