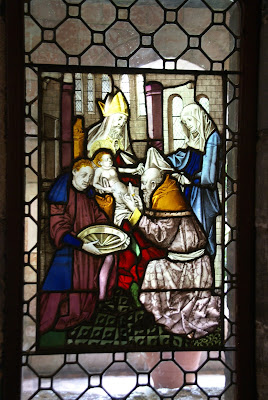 Abram's story continues with a vision from the LORD. Abram complained to the LORD that despite His promise when Abram left Chaldea, God had given Abram no offspring. So God renewed his promise that Abram would have numbers of descendants to rival the stars. But Abram was still not satisfied. He asked: "O LORD GOD, how am I to know that I shall possess it?" (Genesis 15:8 ESV). God requested a sacrifice, which Abram provided. Thus a covenant was formed. But the LORD said "Know for certain that your offspring will be sojourners in a land that is not theirs and will be servants there, and they will be afflicted for four hundred years. But I will bring judgement on the nation that they serve, and afterward they shall come out with great possessions." (Genesis 15:13-14 ESV).

Because Sarai had given Abram no children, she told him to sleep with her servant. When the servant, Hagar, became pregnant with Ishmael, Hagar scorned Sarai for being barren, and Sarai became so angry that Hagar ran away. But the LORD found Hagar and told her to return to Sarai, and that her descendants would be innumerable.

Time passed until the LORD again reminded Abram of the covenant. The LORD said "No longer shall your name be called Abram, but your name shall be Abraham, for I have made you the father of a multitude of nations." (Genesis 17:5 ESV). God told Abraham that for him to keep the covenant he must circumcise himself and his entire household, including family, servants, and slaves. God also changed the name of Abraham's wife from Sarai to Sarah. God promised to bless Sarah and make her the mother of nations. But Abraham laughed at this proposal. Weren't he and Sarah too old to bear children? Couldn't God bless Ishmael? But God told Abraham that Sarah would bear a son, and that he should be named Isaac. But that Ishmael, too, would be the father of kings.

So Abraham circumcised himself and his entire household.

This story shows the patience of God despite the ongoing doubt of Abraham - a doubt which foreshadowed those of Abraham's many descendants during the Exodus from Egypt - a doubt which seemed to encourage God to punish Abraham's ancestors by bonding them into slavery for centuries.

But why was God so patient with Abraham. What was so special about him? And why the name changes? What did these changes signify?

In addition to further developing the characters of God and Abram/Abraham, this story also developed the character of Sarai. Before this, she was only mentioned as a passive character, but here she was shown to love her husband so much that she wanted him to bear a child, even from someone else. But when that someone else, a servant, scorned her, Sarai was no longer placid and giving. She became bitter and angry. This character development foreshadows further angst later in the narrative.
Posted by Rachel at 4:00 AM