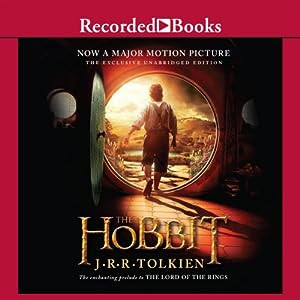 The Hobbit, by J. R. R. Tolkien, narrated by Inglis

Caution: There will be spoilers!

A couple of months ago I had the immense pleasure of listening to the Rob Inglis narrations of The Hobbit and Lord of the Rings. If you ever have the slightest wish to listen to these books, just do it. Inglis' voices are fantastic; he even sings the songs! It was a true delight.

A humble hobbit named Bilbo Baggins is unwillingly thrown into a "nasty adventure" when the wizard Gandalf thrusts himself into Bilbo's home, a troop of dwarves in his wake. Gandalf has misinformed the dwarves that Bilbo is a burglar - the dwarves want Bilbo to burgle a gigantic horde of treasure from the dragon Smaug, who had stolen the treasure (with their mountain kingdom) from the dwarves' ancestors decades before. This is a strange coming-of-age story, since the character is 50 years old already (which is youngish for a hobbit, but still firmly in the adult range). But as the story progresses, Bilbo recognizes that he is a brave hobbit, an adventuresome hobbit, and a very sneaky burglar. 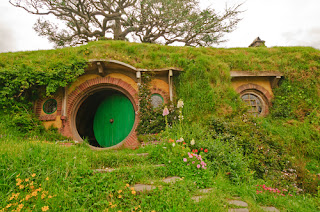 The Hobbit was Tolkien's first major work about Middle Earth, and although it is an excellent book on its own, it is unfortunately overshadowed by his later work The Lord of the Rings. Although LOTR is a sequel to The Hobbit, these two books are very different styles. The Hobbit was intended for children, and therefore has a light-hearted, almost silly air to it. The songs tend to be funny and childish rather than somber and chilling, as in LOTR. An example is when the dwarves are teasing Bilbo with the song:

Chip the glasses and crack the plates!
Blunt the knives and bend the forks!
That's what Bilbo Baggins hates—
Smash the bottles and burn the corks!

Cut the cloth and tread on the fat!
Pour the milk on the pantry floor!
Leave the bones on the bedroom mat!
Splash the wine on every door!

Dump the crocks in a boiling bowl;
Pound them up with a thumping pole;
And when you’ve finished if any are whole,
Send them down the hall to roll!

That's what Bilbo Baggins hates!
So, carefully! carefully with the plates!

Another factor of the young audience is that the characters in the book are much more silly than they are in the live-action movies. (I will discuss the movies in a later post.) A striking example is of Thorin's character, who in the book is silly and long-winded, but who in the movie is dark and romantic (not to mention quite handsome).

The spider scene in the movie is dark and scary. Bilbo is heroic and rescues his friends through cleverness and brave swordsmanship. In the book, he swings through the trees singing a silly song that diverts the spiders' attention.


You'll never catch me up your tree!

After dragging the spiders off on a wild goose chase, Bilbo is able to return to his friends and cut them down from the webs.

The themes in The Hobbit also tend to be a bit black and white - probably for the sake of the young audience. There is a clear good and evil. The good characters always end up choosing mercy and righteousness over power and wealth. (Though, there is a bit of wealth to go around!) As in any good book, there are momentary shades of grey. Thorin, who is otherwise quite honorable, is temporarily blinded by greed - though he eventually redeems himself. 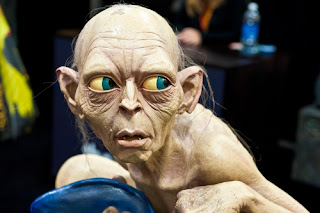 An interesting fact that I found out while researching this review is that J. R. R. Tolkien changed The Hobbit after writing LOTR in order to better fit with the dark purpose of the One Ring. Originally, Gollum willingly bet the ring in the riddle contest. Gollum was dismayed when he found out that he could not keep his promise of the ring, and he instead bargained to lead Bilbo out of the cave. They parted on good terms.

In LOTR, the ring changed from a helpful charm to a powerful device that would suck the soul out of the wearer. Because of this change in the ring's nature, The Hobbit's Gollum had to turn murderous when he discovered the ring was missing.

Overall, this story was quite enjoyable, and I'm glad that I decided to "re-read" it as an adult. I got a lot more out of it this time around than I did when a child.