The Hobbit: The Desolation of Smaug

Beware! Here there be spoilers.

Again, in the second of the three Hobbit movies I expected the story to end the first time I watched the movie. So, as when watching the first movie I was a bit disappointed and confused the first time through. After reading the book, I watched it again, and this time I enjoyed it quite a bit more.

The Desolation of Smaug covers approximately the second third of the Hobbit movies. After their narrow escape from the orcs, Bilbo and the dwarves (again without Gandalf, who's wandered off with Radargast the Brown again) tramp through the forest, get overrun by a pack of hungry spiders and are saved/captured by wood elves led by Legolas. Bilbo manages to escape notice, and slips secretly into the elvin keep, following his captured friends.

It's not quite clear how long they spend in the elvin keep, but several weeks pass, while Bilbo tip-toes around invisibly looking for his chance to rescue the dwarves. In the mean-time, the young and handsome dwarf Kili falls in love with the elf Tauriel. 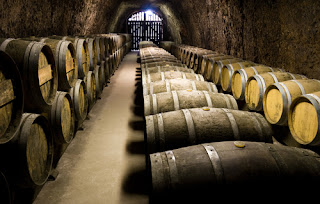 Eventually, Bilbo is able to steal the prison keys off the drunken guard, and he hides his friends in wine barrels to be pushed out of the keep into the river. The elves discover their escape, and are in hot pursuit when the orcs catch up and begin fighting the elves for the chance to capture or kill the dwarves. The dwarves eventually escape in their barrels, as Tauriel chases the orcs.

This scene has some strong similarities and differences to the book. In the book, the dwarves are indeed captured by the elves, and they do escape in barrels, but the elves are completely unaware of the escape, the orcs do not appear (in fact, they are not being actively pursued by orcs at all), Tauriel doesn't exist, and Legolas isn't in this book. I have to admit, though, the movie's escape scene is a lot more exciting than the book's. :)

From the river, Bilbo and the dwarves convince the bargeman Bard to smuggle them into Laketown - a town which cowers in the shadow of the Lonely Mountain, where the dragon Smaug lies sleeping. Thorin, the dwarf leader, promises the people of Laketown part of the treasure from his lost kindom if they will arm him and his brethren for the final stretch of their adventure. Against the recommendation of Bard, who thinks poking around under Smaug's nose is destructively stupid, the dwarves are given weapons (fishermen's spears and such "useless" stuff), and sent on their way.

When Bilbo and the dwarves manage to open the secret passageway to the Lonely Mountain, Smaug becomes enraged and flies off to take revenge on Laketown.

This bit at the end is pretty similar to the book. Bard's character is more developed in the movie - which makes him a lot more interesting. Like I said above, the first time I watched this I was appalled that the story didn't end. But this time around I knew what was coming and was able to enjoy the added romance and adventure in Peter Jackson's movie.