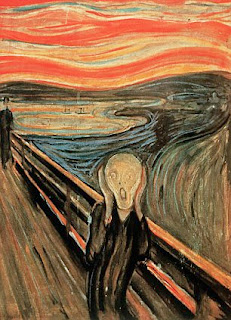 Hi All! My plan is to give a monthly update rather than a weekly (or biweekly in this case) update, but I had some interesting developments in my life over the last couple of weeks and thought it was a good idea to share - since one of the goals of this blog is to decrease stigma of mental illness, I should share my own experiences.

I got a bit burnt out on all the activities I've been participating in as described in my September update. Quick summary, I'd been working full time, volunteering 4 hours a week at a crisis hotline, taking a 3 credit Abnormal Psychology class as well as a 7 credit EMT class. When I first signed up for the EMT class, I hadn't realized it was 7 credits (that wasn't mentioned on the class description), so I didn't realize how hard it would be. After a few weeks of it, I got so burnt out that I got really sick - this was last week.

I decided to drop the EMT class, and they were kind enough to let my tuition transfer to next semester. I will NOT sign up for another class - so I'll be able to focus on the EMT class in January.

Then on Monday, I had a 3 hour anxiety attack. I'm not sure how many of you have had anxiety attacks before, but they aren't supposed to last that long. It's sort of like running a marathon for 3 hours. This happened at work, and because I'm the manager, I can't call my boss and be like: "oh, gotta go home." I simply had to finish the work. It was an exhausting day.

The next day, I freaked out on my boyfriend for no reason (other than our political differences), and then when I was trying to sleep I felt like a screaming monster was trying to claw its way out of my brain. That's when I realized I was in a bipolar mixed state.

Bipolar mixed states have characteristics of both depression and mania. They're very dangerous because they have suicidal ideation mixed with impulsivity, motivation, and energy. Mixed state people are much more likely to commit suicide than a depressed person, because depressed people often lack the energy and impulsivity, motivation, and energy to commit suicide.

Yesterday, I called my psychiatrist but I got stuck in the labyrinthine maze of monsters that is the Park Nicollet phone reception system. One of the monsters even hung up on me, and I had to proceed to "Go" without collecting my $200. By the time I got through to the nurse (an hour later), I was rather worked up. She calmly told me that this is not a crisis line, and I should call Crisis Connection (where, by the way, I volunteer). I practically yelled at her that I didn't want a crisis hotline, I wanted to talk to my psychiatrist. She made an appointment for me to see her later that afternoon. I also made an emergency appointment with my therapist, who I haven't seen since March.

In the end, my psychiatrist tweaked my mood stabilizer and gave me a prescription to Klonopin, which is a benzodiazepine - an addictive sedative. I'm a little worried since addiction runs in my family, and when I start getting symptoms of mania (or apparently mixed symptoms) I start craving alcohol, pain meds, and other such things. I'm not much of drinker, and I'm not in the habit of taking unprescribed pain meds, but I crave them all the same. So getting permission to take a benzodiazepine is a little troubling to me. However, I recognize that I need it in situations like those described earlier in my post.

On a happier note, I was able to go to the Nobel Conference at Gustavus Adolphus College on Tuesday and Wednesday. The theme was addiction, and my Abnormal Psychology prof took a bunch of his students. There were 6 speakers and they were all really interesting.

One of the speakers was Marc Lewis, the author of The Biology of Desire, which I just finished. It turns out Marc Lewis is a bit annoying. He kept trying to push his point (that addiction is a choice and not a disease), until Eric Kandel, the 2000 Nobel Prize Laureate in Medicine, told him "it's either bullshit or science." Another speaker, Carl Hart, who is big on social justice, tried to break the tension by saying "I didn't know we could swear at this conference!" And then the next day during Hart's speech he said "and to quote Dr Kandel, this is bullshit!" It was a pretty amusing conference. Of course, the science was really interesting too, but I plan on writing a review both of the conference and of Biology of Desire, so I'll stop here.

I'm currently reading or listening to: