Bloodchild and Other Stories, by Octavia E. Butler 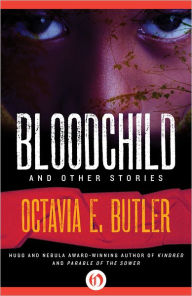 Bloodchild and Other Stories, by Octavia E. Butler

This is a book of horror / dark fantasy stories by the amazing author Ocativa E. Butler. Believe it or not, this is the first book by Butler that I have ever read, and I was amazed at her brilliance.

Her stories were incredibly creative. They covered important issues like race, slavery, sexuality, and identity, all in the guise of alien occupation or dystopic disease and other dark fantasy themes. Her prose was smooth and eloquent.

The most interesting of the stories was her novella Bloodchild, which is about a child that is about to be "sexually" adopted by some alien worm-thing. The story encompassed the feelings of the boy, his mother, and the alien - providing some very startling insight.


After each story, Butler included a short essay of what she intended the story to mean or background in her life when the story was written. These brought further understanding to the story, though I was a little skeptical when she insisted that she hadn't intended Bloodchild to be about slavery. But, I guess, sometimes meanings creep in there unintended. And there's also something to say for the readers' interpretation regardless of intended meaning. To me, slavery was one of the many underlying themes of the story.

At the end of the book, Butler included a couple of essays about what it was like being an African American science fiction author, and encouraged young people to follow their dreams and become authors. Finally, there were a couple of never-before-published stories.

This little book is well worth your time if you are interested in deeper cultural issues of race, slavery, and sexuality - possibly even if you are not specifically interested in science fiction and fantasy.

This post is for R. I. P. X @TheEstellaSociety and the 2015 Halloween Reading Challenge @ReadingEverySeason. It is also for #Diversiverse, @BookLust, which is all about reading books by people of a variety of ethnic/racial backgrounds, so I will provide tell you a little about the author, Octavia E. Butler.

Octavia E. Butler was born in 1947 into an impoverished African American community to a 14-year-old girl. Despite struggling with dyslexia, she had a passion for reading and writing ever since she was very young. As a teenager, she started attempting to publish her stories, despite the extreme difficulty for African Americans publishing science fiction / fantasy. At the time she was one of only a couple African American sci-fi writers. Despite being taken advantage of by money-hungry agents, she finally published Patternmaster in 1976. This book was praised for its powerful prose, and she ended up writing four prequels. She finally became mainstream upon publication of Kindred in 1979. Butler died outside of her home in 2006.
Posted by Rachel at 9:17 AM