Hope in the Dark, by Rebecca Solnit 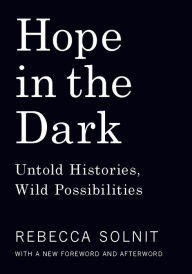 Hope in the Dark is a short book of essays about the importance of recognizing small victories in the face of what seems insurmountable challenge. Solnit is a radical activist who passionately protests many issues such as NAFTA, the destruction of the environment, and war. The book was beautifully written - Solnit surely knows how to compose a sentence.

The reviews of this book seem overwhelmingly positive, and I, too, thought the book had an important point. However, I was not moved by the book as other people are. I think part of the problem is that many of the issues were older - it was originally published in 2004 and republished in 2016 with a new forward and afterward which address more timely issues. Unfortunately, I couldn't get my hands on a 2016 copy since I was trying to get it read in time for the Social Justice bookclub (still time to sign up!) which will read it in January. (I have too many other books in January to be able to fit it in then.)

Another issue I had with the book is it assumed prior knowledge of the issues such as why NAFTA is bad. I've never thought about NAFTA in the past - in fact, I only became aware of it being a controversial issue when Trump recently suggested nixing it. Perhaps that's a lack of awareness on my part, but I would have appreciated more information. But explaining the issues was not what this book was about. This book was about hope, not about education. Because of this "flaw," I found the book very boring in parts - I'm a fan of educational books more so than uplifting ones.

That said, I totally understand why people are moved by this book, and I appreciate the timeliness of preaching hope in the appearances of failure.