In the past, there was an amazing amount of stigma against homosexuality. King Henry the VIII of England declared "the detestable and abominable vice of buggery" a felony punishable by death. It was not until 1861 that the maximum penalty in England was reduced to 10 years in prison. Similarly, in 1885, when lesbianism was about to be criminalized, Queen Victoria declared lesbianism to be impossible, and therefore there was no point in making a law against it. In the US, the last law prohibiting homosexuality was struck down by the Supreme Court in 2003. As recently as 1973, homosexuality was a diagnosable disorder in the DSM.

However, homosexuality was accepted in non-Western cultures. For instance, in Melanesia, which is a group of islands in the South Pacific, a society called the Sambia believe that semen is important for physical growth, strength, and spirituality. They also believe that the body is only capable of creating a small amount of semen, so they must get the semen from elsewhere. In order to maintain adequate semen levels, boys exchange semen through oral sex. After puberty, the teens can penetrate the younger boys, thus providing them with semen. As the teen ages, he "transforms" into a heterosexual, and ends sexual intercourse with boys after the birth of his first child. Melanesian children who refuse such practices are considered abnormal and are therefore very rare.

Thankfully, Western culture is beginning to accept homosexuality. In the 1960's gay and lesbian people began to be more active for their rights. Such activist action led to increased brutality of police and homophobic citizens against homosexuals. Most recently, homosexual activity, although still highly stigmatized by some groups, is more widely accepted as within moral boundaries. Same sex marriages have become legal in all 50 states.

Despite the removal of much of the stigma against homosexual people, there is still a shocking amount of stigma against transgender / transsexual people. In fact, trans people are the minority most likely to be killed in the US. As of October 2015, 22 transgender women have been killed in the US. Considering how rare trans people are in the US, these are shocking murder rates. 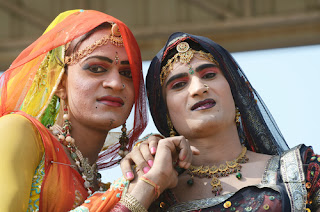 Again, the stigma against trans people is most pronounced in Western culture. For instance, before being colonized by the British in the 18th century, transsexuals were revered as holy people who could remove the Evil Eye and bless homes and other places. But with the British also came stigma. Now, transsexual women resort mainly to begging and prostitution. (I will review a documentary on this subject on Saturday.)

After an adult is diagnosed with gender dysphoria, he must undergo years of therapy, including a year of living as the other sex. Only after all these years of hard work can the transsexual be approved by insurance for gender reassignment surgery.

Disclaimer: I apologize for the male (or male->female) leaning of this post. I'm making these posts to help me study for my Abnormal Psychology class, and the book was mainly about men on this subject.