In my post about panic disorder, I described fear as an emotion that elicits the "fight-or-flight" response of the autonomic nervous system. In anxiety, unlike fear, there is no activation of the fight-or-flight response. Anxiety is a long-term response oriented towards future events rather than imminent danger. Short-lived, low levels of anxiety can be good because they help prepare a person for upcoming activities such as an exam or sports event. However, long-term high-intensity anxiety creates a state of chronic over-arousal that can lead to physical troubles such as reduced immune response (i.e. susceptibility to disease) and increased blood pressure, as described in my post about the biological effects of stress.

In generalized anxiety disorder (GAD), anxiety is chronic, excessive, and unreasonable. The excessive worry must be accompanied by at least three of six other symptoms: restlessness, fatigue, difficulty concentrating, irritability, muscle tension, and sleep disturbance. People with GAD live in a constant state of future-oriented apprehension. They are generally hypervigilant for signs of threat and tend to engage in avoidance behaviors such as procrastination and checking. The most common worries are about family, work, finances, and personal illness. They have difficulty making decisions, and then worry endlessly about whether their decision is correct. 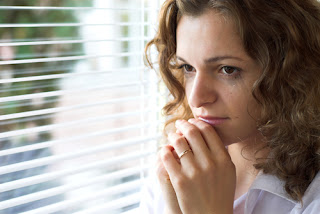 My anxiety diagnosis is "anxiety - not otherwise specified (NOS)," which means that my anxiety doesn't fit into any of the cookie-cutter DSM-5 diagnoses. To me, my symptoms seem to be a combination of those described in panic disorder and those of GAD. Like in panic disorder, my anxiety symptoms seem to have no obvious stimulus, so they become associated with whatever I'm thinking about at the time of the attack. (Though unlike panic disorder my attacks never peak at pure panic - they remain at high-level anxiety.) Like GAD, however, I have difficulty making decisions and can't stop worrying about whether I've made the right choice.

As an example: during my 3-hour anxiety attack described in a previous post, my anxiety took on a very strange form. Instead of worrying about something really troubling, I began obsessing about what book I would read next - probably because that's what I was thinking about when the anxiety attack hit. While in my physiologically aroused state (heavy breathing, pounding heart, sweating) I had to keep making list after list after list of the books I wanted to read, and reordering them by priority. Every time I made a new list, I'd calm down a little and go back to work. But within 5 minutes my anxiety would peak again, I'd have to make a new list. Rationally, I knew that what I read next was of very little import, and whatever it was I would (hopefully) thoroughly enjoy it. But for some reason my body couldn't stop panicking, and my unconscious mind associated that anxiety with books. Luckily, I don't have an anxiety attack every time I think about books. :)

Most people with GAD are able to continue with their daily activities despite their impaired ability to function. Therefore, they are less likely to request psychological treatment for their disorder. They do, on the other hand, show up in physician's offices with medical complaints, probably partly due to unnecessary worry about their health and partly to the negative psychological repercussions of stress.

People with GAD are extremely sensitive to the feeling that they are unable to control their environments. It's possible that teaching the patients to feel in control (or to let go of things they can't control) will help them to moderate their own anxiety. Perhaps they should all recite the AA serenity prayer every day. ;)

(Of course, this prayer assumes that the patient believes in God, which makes it annoying to many potential members of AA who are atheists or not of monotheistic origin. But I suppose that's a gripe for another post.)