Upon publication of the DSM-5, there were a lot of ignorant people laughing at the "new" disorder "hoarding," and giving it as an example of how the DSM-5 encourages over-diagnosis of "normal" individuals. Such people do not understand the dire nature of this disorder. An individual with hoarding disorder finds it extremely distressful to discard objects, regardless of their actual value. These objects fill up their living spaces, leading to impairment of the individual's ability to live a healthy, functional life.


Hoarding has recently reached the popular eye due to TV shows like A&E's Hoarders or TLC's Hoarding: Buried Alive. I haven't watched either of these shows, so I don't know if they are a good representative of the dangers of hoarding. But I can give examples of such dangers:

To go along with my Adrian Monk theme in my OCD post, Adrian's brother Ambrose Monk is an extremely agoraphobic hoarder. In the episode Mr. Monk and the Three Pies, Ambrose's house is set on fire, and he is unable to exit the house - partly due to the lack of safe pathways through his piles of newspapers.

If you like real-life examples, I have an acquaintance with hoarding disorder. She fell in her home and was unable to get up due to the huge piles of junk surrounding her. She lay there three days before someone found her. Luckily, she was holding a jug of juice when she fell, so she survived surprisingly well during this time.

Obsessive hoarders tend not to respond to the same types of medications or therapies as people with OCD, and their brain activation patterns are different than those recorded in OCD patients. Therefore, it is possible the two disorders might not be as strongly related as categorized in the DSM-5. 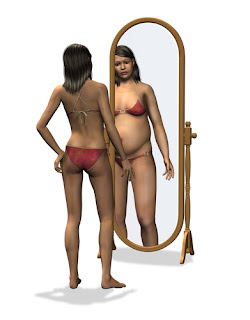 People with body dysmorphic disorder (BDD) become obsessed with one or more body parts that they perceive as hideous or deformed. When people with BDD look in the mirror, they often see a defect that is not present, such as the woman above seeing herself as fat when she is actually thin. Such people are often self-conscious about this perceived defect, and believe that everyone around them look down on them for their ugly appearance. People with BDD might spend hours every day looking in a mirror obsessing about their perceived defect, or they might compulsively avoid mirrors altogether. BDD patients often avoid social situations, and sometimes they stop leaving their house altogether. It's possible, even, that they might have so many plastic surgeries that their nose dies (rumored to have happened to a certain deceased celebrity).

One example you might immediately think of (especially since it is pictured above) is people with anorexia nervosa. However, anorexia is not always a form of BDD. Many anorexics are emaciated and are pleased with their appearance. Some, however, are emaciated and see themselves as fat when they look in the mirror. These are the type with BDD. A long time ago, I remember reading about a study in which a tight-fitting full-body suit was worn by BDD-related anorexics. The tightness of the suit allowed the subjects to change thier proprioceptive perception of their body types. Because they could feel how thin they were, they began to perceive themselves as thin. I'm pretty sure I read about this study in Sandra Blakeslee's book The Body Has a Mind of Its Own: How Body Maps in Your Brain Help You Do (Almost) Everything Better.

More mainstream treatments for BDD include SSRI's and a form of cognitive behavioral therapy in which the subject is made to wear clothing or makeup that accentuates the "defect" rather than disguising it. The subject is also told to not look in a mirror, even when they feel compelled to.