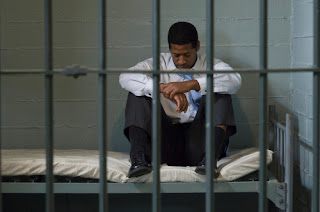 New Asylums (2005) is a Frontline documentary that delves into the problem of housing the mentally ill in prison systems. Believe it or not, the world's three largest asylums for mentally ill are the Cook County Jail in Chicago, the Twin Towers of the Los Angeles County Jail, and Riker's Island in New York. This problem has been escalating ever since the mid 1900's when deinstitutionalization of mentally ill and intellectually challenged became a popular movement to encourage "humane" treatment of mentally ill and to reduce state expenditures on medical care.

The original plan, as described by the Community Mental Health Act of 1963, was to fund community mental health centers in which the mentally ill could be treated while working and living at home. However, most of the proposed centers were never built, and few of those built were fully funded. As deinstitutionalization accelerated, hundreds of thousands of mentally ill patients were released without a place to go and without adequate access to mental health care. A lot of them ended up on the streets. And on the streets, their mental illnesses flared up, leading to law-breaking. Many of the laws broken were for basic living purposes - theft of food, break-ins to get a place to sleep, stealing blankets out of a car - and many were violent crimes fueled by a desperate situation combined with psychosis. And this is how jails and prisons became the new asylums.

The documentary begins with a disturbing scene of "group therapy" in which inmates are locked inside tiny cages, with just enough room to sit in a chair. In this warm, inviting environment, the inmates are encouraged to share their problems with their fellow inmates. I think it is fantastic that group therapy is provided for inmates, but how helpful is it really, in this environment? Can an inmate really share his fears and heartbreaking secrets with other inmates? Wouldn't rumors get around quickly among the inmates and less sympathetic officers in prison? How much help can group therapy really do these inmates, especially since they are locked in a tiny cage; which probably doesn't encourage openness?

A while back, I told my therapist that I thought Dialectic Behavioral Therapy (DBT), which I was currently undergoing, would be a world of help to many people in prison. She agreed. But now that I see this video, I realize the limitations of such therapy. Prison does not provide a safe environment to let those feelings out. But what to do? Do we just not provide the inmates with therapy because of these limitations? Clearly, the problem needs to be solved before the mentally ill people are imprisoned, but I don't know how to solve that problem, other than reinstitutionalization.

The documentary only became more horrifying after that. There were scenes in which a naked, frightened, screaming man was resisting being handcuffed. Eventually, a group of 5 men who were dressed like a SWAT team and carrying a riot shield burst into the cell, pinned the man down, and carried him kicking and screaming away. One officer tells the camera "A lot of the mentally ill inmates in here, you gotta use more...I mean, you do have to use force on them."

Having seen the footage, I understand why the officers feel that they need to use a lot of force. I mean, how else would they get the naked, psychotic, screaming man down to solitary? But don't you think that the strict and unforgiving culture of prisons is part of the reason these inmates are acting out? Isn't the fear of solitary, which would certainly exacerbate psychotic symptoms, part of why they're acting out? Most of them would certainly be better behaved in a healthier, more caring environment. And then force wouldn't have to be used.

I can see two solutions (both of which I think should be implemented): the number of mentally ill patients housed in mental institutions should be increased, thus decreasing the prison population. And people in prison should be treated with more kindness - providing a rehabilitative instead of punitive justice system.

The documentary continued by describing Oakwood Correctional Facility, which is a temporary housing unit for mentally ill inmates who need to be stabilized. The culture and environment seems so much more caring and open - it appears that inmates who were dangerously psychotic in the general prison are stable and well-behaved at Oakwood. There's a heartbreaking scene in which one of the inmates is being told by a panel of mental health workers that he's stabilized and ready to go back to the general prison population. The inmate practically begs to stay at Oakwood. The panel is at first kind, but they become more and more firm. They show a depressing lack of empathy. The tragedy is that they have to. They have to send the inmate back to the general population, because they don't have enough beds to house all the thousands of mentally ill inmates in the Ohio state prison system.

At this point I got into a discussion with a classmate about why these inmates aren't all housed in such therapeutic environments as Oakwood. But where would Ohio state get the money to pay for those units to be built? How would they decide who is mentally ill enough to end up in such a facility? And is it ethical to treat some 16% of their inmate population so humanely and ignore the inhumane treatment of all the other prisoners? Do the "healthy" prisoners not matter just because they don't have a serious mental illness? Once we start creating this humane prison system, where do we stop?

During most of the documentary, I was applauding Ohio state for at least trying to create a therapeutic environment for its mentally ill inmates. But there were a couple of comments which made me rethink. Reginald Wilkinson, the Director of the Ohio Department of Corrections said that he once had a judge mention to him: "Well, I hate to do this, but you know the person will get treated if we send the person to prison." So judges are more likely to give a prison sentence because they feel there's better mental health care there? My question was confirmed later in the documentary when it pointed out: "We shouldn't devote ourselves to continually raising the level of mental health care in prisons because the better you make an institution that shouldn't be used for the purpose you're improving, the more you're ensuring its use."

It's a catch-22. If you don't work to take care of the mentally ill in prisons, they'll get worse and you'll have to stash them away in solitary or other "general population" punishment areas. If you do develop a system to care for the mentally ill, then you end up with even more mentally ill people dumped into your system, where they don't belong. So tragic. I wish enough people cared about this highly stigmatized group so that money could be raised to properly care for both the imprisoned and the unimprisoned mentally ill.