What can I say about Game of Thrones that hasn't already been said? I'm not even sure how to summarize it properly because there is so much that would be left out. But, briefly, Lord Eddard Stark is swept up into a web of conspiracy when he is suddenly demanded to go to the capital city to be the Hand of the King. He must protect his family, his honor, and the king from enemies - and everyone is an enemy.

This is a sweeping epic that jumps from character to character to weave an intricate web of plots, subplots, and sub-sub-plots. The characters are heartbreakingly well developed - and I say heartbreakingly because you fall in love with the "good" ones and hate the "bad ones."  As each character gets thrown into his or her own trap, your heart aches for them. None of the characters are all good or all bad - they're very human. This is not Tolkien. It's not a happy story where the good guys always prevail and only a few people die - and that for the sake of heroism. People die left and right. And they don't necessarily die heroic deaths - they die because that's what happens in the game of thrones. It's as bloody and horrifying as the War of the Roses. And I think that's what makes the book so good: it's a story about human nature and the struggle between power and honor.

Usually I drag my feet reading long books. No matter how good a book is, it's hard because I'm such a slow reader that I feel I'm  not making progress. Not so with this book. This book was so smooth that I barely noticed the length. I didn't want it to end. As soon as it ended, I bought the rest of the series so I could start them right away. But this book was also a very difficult read for me. There's so much sorrow in Game of Thrones. The reality of the suffering attenuates the escapism that one usually feels when reading epic fantasy. And yet I couldn't stop myself from reading. I was too invested in the characters - both the likable and the detestable ones. As soon as I finished Game of Thrones, I wanted to watch the first season of the HBO show. I've been warned against the show many times because of the graphic violence and sex, which I tend not to like. But I loved the book so much that I just had to watch the show.

The first season of Game of Thrones followed the book perfectly. It managed to get all the important bits from the plot - there were very few times when I turned to my boyfriend and said "it left such-and-such out." There were no special scenes from the book that I wished the show had included. I hear the show deviates from the books in later seasons, and I'm ok with that. I don't think a show has to follow a movie perfectly to be a good show. But I'm always impressed when the creators of a show are able to be so devoted to the book's plot.

In some ways, the show was easier to watch than the book was to read. The jumping around from character to character was more smooth, in the sense that I wasn't spending time during one chapter wondering what happened to the person in the last chapter. But that also could have been because I knew exactly what was going to happen while watching the show.

I love the opening theme of Game of Thrones - it's so fitting to the story, and it provides a map that gives you a wonderful visual of where everything is respective to everything else. Of course, George R. R. Martin is so good in his descriptions that I already had a pretty good map in my head, but it's nice to see a map on a show. I'm glad they found a way to work it in. Very clever. 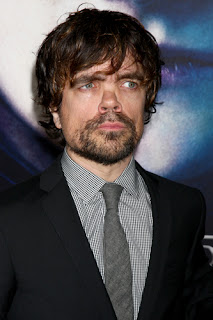 My favorite character in the show was Tyrion Lannister, who is played perfectly by Peter Dinklage. There's just the perfect mixture of lovable and detestable characteristics in Tyrion. Tyrion is so funny, so clever, so conniving. He is kind, yet ruthless. I want him to win, even if he's on the "wrong" side. Please don't die, Tyrion!

The character in the show that ticked me off the most was Cersei Lannister. Her facial expressions just made me want to punch her. And I guess that means Lena Headey is a fantastic actress. Because that's exactly how I'm supposed to feel about Cersei Lannister.

Overall, I loved this show, and as soon as I finish Clash of Kings I'll dive into season 2.

4.5 stars for sheer awesomeness, ability to follow the book perfectly, character development, plot, intrigue, mise-en-scene, visual effects, acting. Loses half a point for sex and violence, though that's not entirely fair since the book had just as much sex and violence. But I'd rather read it than see it.