The Fifth Child, by Doris Lessing 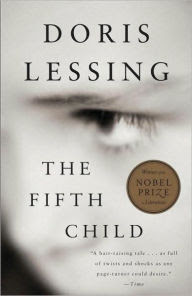 This story begins with Harriet and David standing apart from the crowd. They observe the crowd as outsiders would - they are old fashioned & reserved; they have morals. But when they see each other, they instantly recognize a similar soul.

They become a happy young couple who defies social norms and wants to have at least six children. The first four children are splendid, but the fifth comes too early. A terrible pregnancy produces a child which seems only partly human - Ben is some mutation or maybe a fallback to neanderthal times. Ben is endlessly hungry. He's angry and brutal.

Harriet's maternal instinct tells her to love Ben, but she struggles to do so. As Ben grows, she feels blamed for his brutish personality. The doctors and teachers imply that there's nothing wrong with Ben, the problem is that she doesn't love him enough. Her family blames her for having so many children to begin with, and then afterwards for not institutionalizing him. The family falls apart as she focuses all her attention on Ben.

This story was disturbing and poignant in so many ways. To a certain extent, it was left open to interpretation about whether Ben's problems were exasperated by everyone's loathing of him - or did he simply not need love because he was not "human?" It's possible that the sequel, Ben in the World, answers that question. I may pick it up after mulling this one over for a while longer. I'm going to have to assume for the time being that Ben was human and needed love, however.

This is a story about intense self-involvement. Harriet and David begin as incredibly self-absorbed individuals who blossom into a self-absorbed couple. Everything is about them. They want a large house they can't afford? Ask daddy for money. They want more children then they can pay for? Ask daddy for money. They want to have children faster than they are physically capable? Ask mommy to move in. They selfishly take and take, only feeling a little pang of injured pride that they aren't able to show the world that they can do it themselves. Even their thank-you's seem just-for-show.

Then Ben comes along. Outwardly, it would seem that everything becomes about Ben. He needs a lot of attention in order to keep his brutality in check. Harriet focuses her energy on Ben and David focuses on work, and the other children are emotionally neglected. In reality, everything is all about Harriet, not Ben. Even when she rescues Ben from certain death in an institution, this rescue is not about saving a life - it's about saving Harriet's morals. She can't just let Ben die, that would sacrifice who she is. But she doesn't save him because she feels he should live. She saves him because she couldn't live with herself if she let him die. Thin line, I know.

From reading other reviews, most people seem to feel that this is a book about a mother trying her hardest to love a child no matter what. And I do feel that Harriet wanted to love Ben. But, again, I question her motives in wanting to love Ben. Did she love him out of maternal instinct that was repulsed by a "changeling?" Or did she want to love him because she had self-pride in her old fashioned morals? The latter, I think.

Maybe upon reading the sequel and re-reading this book I'll look at Harriet differently. I hope so. I wanted to like her. But she just seemed so selfish to me. I do think she did the best she could, though...and a good bit more than many people would have done.

I'm going to pair this book up with a memoir about a real mother raising a violent child - The Price of Silence.