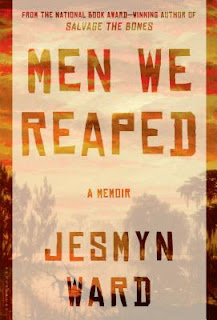 I'm reading Men We Reaped, by Jesmyn Ward for the Social Justice bookclub hosted by Kerry at Entomology of a Bookworm. The discussion questions are provided by Kerry, and will contain spoilers.


1) In the very first pages of her book, Ward calls this her "rotten fucking story." Did this change how you approached the chapters to come in any way?


I don't think her terminology here affected the way I approached the following chapters. I guess I expected a pretty rotten story to begin with, based on reviews of the book. But I think using such strong words made that passage more powerful.

2) When she lists the names and dates of the black men in her life who died in the four years between 2000 and 2004, Ward writes, "That's a brutal list, in its immediacy and its relentlessness, and it's a list that silences people. It silenced me for a long time." She then goes on to wonder "why silence is the sound of our subsumed rage, our accumulated grief. I decide this is not right, that I must give voice to this story." I've read a lot about voice and the importance of voice lately, so I'm curious what others think of the importance of voicing the horrors of this story, these losses.

I know several people with PTSD, so I know that it is very hard recounting the horrors of your life because it drags everything to the front of your mind again. On top of that, a lot of people don't want to hear your pain. They have an attitude that everyone experiences pain and that your pain is no worse than anyone else's. That you are simply being whiny or that you exaggerate. It's hard putting up with that rejection after you've borne your heart to the world. However, it's important for people to hear stories like this because it makes them think about how their own actions might be affecting the people around them. Unfortunately, it's the thoughtful people who read these books - the ones who would benefit the most are not interested.

3) What do you make of the two timelines in Men We Reaped? To what effect do you anticipate--or perhaps hope?--Ward will use these inverse chronologies?

I admit, at first I found the two chronologies a bit confusing because I'm listening to the audiobook. But eventually I realized what was going on. I think this is the best way to tell this story instead of straight chronological order because she's building up the suspense for what I assume is the most powerful of the four stories.

4) The idea of gender is woven throughout Ward's memoir, but particularly in reflecting the unique freedoms--and risk of lack of freedoms--of the black men in her life (as compared to the black women in her life, herself included). How do the men and women in Ward's stories subscribe to (or not) these gender expectations, and how do you think that influences their experiences?

So far, the elder women in the book seem to follow the gender rules of their culture - no smoking, working all the time (both in the home and out), etc. On the other hand, the younger women are more liberated. Strangely, I don't think that the liberated women are any more happy than the non-liberated women because liberation brings a whole new set of problems like the availability of alcohol, drugs, and unsafe sex. Not that I'm criticizing liberation, only that I think that socioeconomic status strongly affects the stresses in one's life.

5) Ward frames her story with a hope: "I'll understand a bit better why this epidemic happened, about how the history of racism and economic inequality and lapsed public and personal responsibility festered and turned sour and spread here." Based on the first several chapters, do you think her exploration of these deaths will get her where she hopes to go? Or are these kinds of events impossible to ever truly understand?

Although reliving the horrors of one's life is extremely difficult, it is a common treatment for PTSD. Reliving horrors helps the person to process them. So, yes, I think writing this book will help her to gain some understanding of what has happened in her life.
Posted by Rachel at 8:09 AM