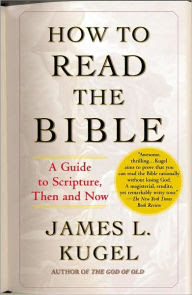 I've decided to take Chapter notes on this tome because it'll help me keep everything in mind when I'm reading the Bible next year.

In Kugel's introductory chapter he points out that there are some confusing or conflicting passages in the Bible. Therefore, four assumptions were made in ancient times to interpret the Old testament and get rid of these inconsistencies. These assumptions have carried through to modern times:

1. They assumed that the Bible was a fundamentally cryptic text, and that there is hidden meaning. For instance, Kugel refers to the story of Abraham and Isaac: if God knew the outcome (that Abraham would pass the test) why test him in the first place? Ancient readers decided that, as in Job, God wanted to prove to others (perhaps the Devil) that Abraham was devoted. They interpreted the words "and it came to pass after these things" to be "after these words [with the Devil]." This is because the word for "things" in Hebrew could also be interpreted as "words."

2. The readers assumed that the Bible was a book of lessons meant to apply to their own times as well as the time in which it was written.

3. Another assumption was that the Bible contained no contradictions or mistakes. There is always an explanation for anything that appeared to be a contradiction. For instance, in the story of Abraham and Isaac, it seemed uncaring of Abraham to lie to his son and tell him that God would provide the sacrificial animal instead of telling Isaac the truth of who would be sacrificed. One explanation was that in the story, the words "and they walked together" after Abraham appeared to lie actually meant that Isaac understood that he was the sacrificial animal, and therefore walked together with his father on that topic.

4. Finally, they assumed that the Bible was divinely inspired.

These examples from Abraham and Isaac are considered by Kugel to be straightforward, and not allegorical. He claimed that the Jews and early Christians (who were also Jews) interpreted the Bible in this straightforward way. But soon Christianity began to be adopted by the Hellenistic community, which had been used to interpret their own religious legends (such as the Iliad) as allegorical. Therefore, it wasn't much of a step for them to interpret the Bible allegorically - a tendency which has prevailed in Western culture through the centuries.

The Old Testament was therefore ripe with allegorical prophecies and stories which could be used to interpret the New Testament. For instance, the story of Abraham and Isaac was a divine prediction of God's sacrifice of his only son Jesus.

Around the 13th century, another four rules for interpreting the Bible were added to the original four. The Bible could be interpreted as a literal historical document, an allegorical story telling you should believe, a set of morals, and an anagogical story.

In the 13th century, only a priest or monk scholar was able to interpret the Bible because they were the only ones with enough education. However, during medieval times this began to change. People started to doubt this four-fold meaning of the Bible.

Fast forward a bit to the 1500s and the Protestant Reformation. Many people were disgusted with corruption in the church and began to believe that the understanding of the Bible did not lay in translations and commentaries of the past. The idea of papal authority began to seem illogical. Why should the church tell you what to believe?

As protestants began to break off from the church, many new interpretations emerged, but they still followed the original four assumptions. But in the eighteenth century, people started to explore the "human side" of the scriptures - in other words, who wrote the Bible. Were they divinely inspired? Were they capable of errors?

For instance, during early interpretation of the Bible, people believed that Isaiah predicted Jesus would be born in Bethlehem under certain conditions (as described in Matthew). In the eighteenth century, people began to wonder if Matthew simply alluded to Isaiah in his story, rather than Isaiah predicting Jesus' birth.

If you're interested in joining me in a literary study of the Bible, check out my year-long 2017 Bible group read