The Epic of Gilgamesh - Analytical Summary 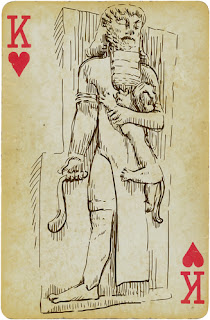 The Epic of Gilgamesh is a story about the futility of seeking immortality. It's a journey of self-discovery in which Gilgamesh learns the ultimate truth - every human dies. It follows Gilgamesh, king of the ancient city of Uruk in southern Mesopotamia. As a youth, Gilgamesh was a capricious and domineering king. He deflowered the maidens, bullied the children and elderly, and forced labor on the men. His people prayed to the gods that they would send respite. So the gods formed the magnificent wild-man Enkidu out of clay. Enkidu fought in mighty hand-to-hand combat with Gilgamesh. When they found themselves nearly equal in strength, they embraced and became dear friends.


Gilgamesh found entertainment and love in his new friend, and left the people of Uruk alone. But the two unearthly men soon became bored. They decided that they wanted to earn immortality by achieving great feats - or at least die trying. Rash youths, they glorified death, thinking it would immortalize them.

First, they set out to defeat the beast Humbaba, whom the god Enlil had appointed protector of the forest. Once conquered, Humbaba begged for mercy. But the two youths, mistaking death for victory, chopped off his head and then downed many of the huge trees Humbaba had protected.

Gilgamesh and Enkidu certainly made an impression, because upon returning to Uruk, Ishtar, the fertility goddess, fell in love with Gilgamesh. In his blood-glory, Gilgamesh scorned the love of Ishtar, who ran to daddy and pouted and screamed until her father loaned her the Bull of Heaven to punish Gilgamesh.

The Bull brought famine and drought. He drank the Euphrates in a few gulps. He snorted, and the earth cracked before him. But Gilgamesh and Enkidu were in a blood-lust fury. They tore the Bull apart, and Enkidu threw the shank of the Bull at Ishtar claiming he'd tear her limb from limb if only she'd come down from the wall. Then Gilgamesh and Enkidu rode through the streets exclaiming: "Who is the most magnificent hero? Gilgamesh is! Enkidu is!"

With these two "victories" over death, Gilgamesh and Enkidu fancied themselves equal to the gods. But they soon found themselves sorely wrong. The gods punished the two by giving Enkidu a wasting illness. Before, they had glorified death as a path to immortality. But now they were standing face-to-face with death, and they were appalled by what they saw. To slowly die breath by breath? Humiliating! The loss of life, of friendship, of love? Tragic!

Gilgamesh could not face the reality of his friend's death; refusing burial until maggots fell out of Enkidu's nose. Then Gilgamesh melted down. He realized that he is human - and humans die. And death is not glorious. It leads to rot and decay. This was the second stage of Gilgamesh's folly: he no longer saw death as a path to immortality, nor did he see it as a natural part of life. To Gilgamesh, death was an enemy who must be defeated.

Gilgamesh wrapped himself in the bloody skins of a lion and roamed the earth trying to hide from death. He became increasingly more violent and insane. In one passage, he found a boat that would take him to a man-god who Gilgamesh thought could advise him on becoming immortal. But instead of asking the boatman to ferry him across the lake to Utnapishtim, Gilgamesh furiously destroyed everything in sight. Having shown his power, he then demanded the boatman ferry him. But the boatman told him "How can I? You have destroyed the tools I need to do that."

Everyone Gilgamesh talked to on his journey told him the same thing - death is inevitable. You are wasting your life in futility. But he would not listen.

He finally reached Utnapishtim and asked the man-god how he had become immortal. Utnapishtim related the story of an annihilating flood which killed all but him, his family, and the animals he brought on his ship with him. Realizing the horror that they had empowered, the gods rewarded Utnapishtim with god-hood - promising never again to destroy the inhabitants of earth. But, Utnapishtim assured, the gods would never again grant immortality. Death was now the inevitable finale of life.

Gilgamesh was relentless, so Utnapishtim challenged him to fight death's younger brother sleep for only seven days. Gilgamesh reclined and immediately fell asleep from exhaustion. He slept for 7 days before Utnapishtim woke him.

Defeated in the realization that death could not be overcome, Gilgamesh prepared for his journey home. He bathed, anointed his body with oils, and donned civilized clothes. He was now willing to face death as a man. But there was one more lesson Gilgamesh had to learn before returning to his kingdom.

As a parting consolation prize, Utnapishtim told Gilgamesh that at the bottom of the lake lay a plant that would return youth to whomever ate it. Gilgamesh dove into the lake and retrieved the plant. Instead of eating it right away, Gilgamesh decided to take it back to Uruk. In his hand, he finally clutched a tiny morsel of immortality, something that would allow him to return to Uruk wise and youthful. Yet he hesitated.

While on his return journey, Gilgamesh stopped by a lake and bathed. He carelessly placed the plant on the shore. Of course, the plant was stolen by a passing snake, which sloughed its skin and slithered youthfully into the ground.

Thus Gilgamesh realized that his entire quest for immortality - from the glory-seeking of his youth, to the insane grasping for godhood, to his desperate clutching at the comfort of youth - was in vain. He returned to Uruk an introspective, wise king. This elderly Gilgamesh finally attained a form of immortality: he built temples, halls, and the great wall of Uruk (parts of which have been found by archaeologists today). He brought prosperity to the city.

My one lingering question after writing this analytical summary is why did Gilgamesh hesitate to eat the plant? Was it his final folly to hesitate? Or was this hesitation encouraged by his new-found wisdom? I can't decide.

There are so many things to say about The Epic of Gilgamesh, and I had big plans for this post. But I see now that there's no way to give even a small portion of Gilgamesh's due in one post. So I will break this into a series of posts. More is yet to come. If you have anything specific you'd like me to discuss, let me know.