Firefly and Serenity - Humor, Adventure, and a Question of Morals 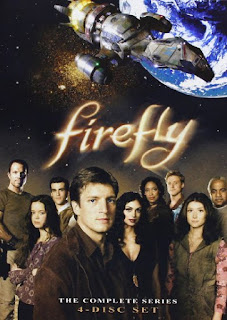 In anticipation of Riverview Theater's yearly showing of the movie Serenity (proceeds benefit Equality Now), my boyfriend and I watched the TV series Firefly. If you haven't watched this show, you need to.

In this story, created by Joss Whedon, humans have moved from an overpopulated Earth to a galaxy with many planets. A totalitarian government called the Alliance rules.

The plot follows a spaceship called Serenity, with a crew of scavengers and smugglers operating on the outskirts of society. They visit undeveloped worlds where people live in an interesting fusion of Eastern culture and the Old West.

To appear more "respectable" the crew pick up some passengers, inadvertently welcoming a man with a secret the Alliance will do anything to hide. During the rest of the season, the crew wrestle with their moral obligations to keep the man safe and their self-protective desire to get as far away from him as possible.

In one of my favorite scenes, a hard-ass mercenary character - Jayne Cobb - spends the entire episode wearing a ridiculous knitted hat from his mom. In a touching and hilarious scene, Jayne opens a package from his mom and haltingly reads a letter from her. When he gets to the phrase "the enclosed" he exclaims "Ooooh!" and gleefully reaches into the package to bring out the hideous hat. He gives it a strange look, and then puts it on his head with a huge smile. The crew tried to keep straight faces and compliment the hat. One said "A man walks down the street wearing that hat, you know he's not afraid of anything."

I'm hesitant to put up a picture of Jayne wearing the hat, because I don't want to post any pictures that might be copyrighted. You can always Google it if you want to see it. But here's a picture of my boyfriend at the Serenity showing dressed up as Jayne. 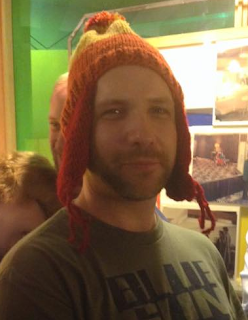 By December of the year aired, Firefly had 98th in Nielson rating. Despite this success, it was canceled half-way through the season. Apparently it had some problems with Fox. Fox wanted the main character, Mal, to be more jolly and less dark. Frankly, I believe that would have ruined the atmosphere of the show. Also, Fox was not happy that the show focused on "nobodies" who get "squashed by policies."

After the show was canceled, it gained a cult following. These avid fans demanded to know how the story ended. Thus, the movie Serenity was released. 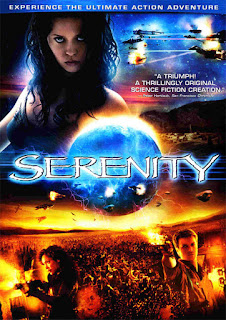 Although this movie kept the dark action and philosophical questions, it lacks the humor of the TV show. Also, I doubt the movie would make any sense to someone who hasn't seen the show. Despite these disappointments, I enjoy the movie and would be happy to see it any number of times.

4 snowflakes for plot, characterization, and action